Argo is an international programme that coordinates the collection of information from the ocean interior using a fleet of robotic instruments. These instruments, called profiling floats, drift with ocean currents and move vertically between the surface and 2000m, 4000m or the ocean floor. The data collected by Argo describe the temperature and salinity of the water and some floats measure other properties that describe the biology/chemistry of the ocean.  The main reason for collecting this data is to better understand the role of the oceans in the Earth's climate and thus be able to improve estimates of its future evolution.

Each Argo profiler spends most of its life below the surface. The name Argo was chosen because the float array works in partnership with the Earth observation satellites, Jason, which measure the shape of the ocean surface (in Greek mythology, Jason sailed his ship Argo in search of the Golden Fleece).

Each Argo profiler is launched from a ship. Once in the water, the float descends to stabilise at a depth of 1km. Ten days later, the float descends to a depth of 2, 4 or 6 km and then rises to the surface. As it rises to the surface, the on-board sensors are activated and measure the properties of the ocean. Once at the surface, the float transmits the data and its position via satellites to receiving stations on land. The float then sinks again to repeat the 10-day cycle until its batteries are exhausted. 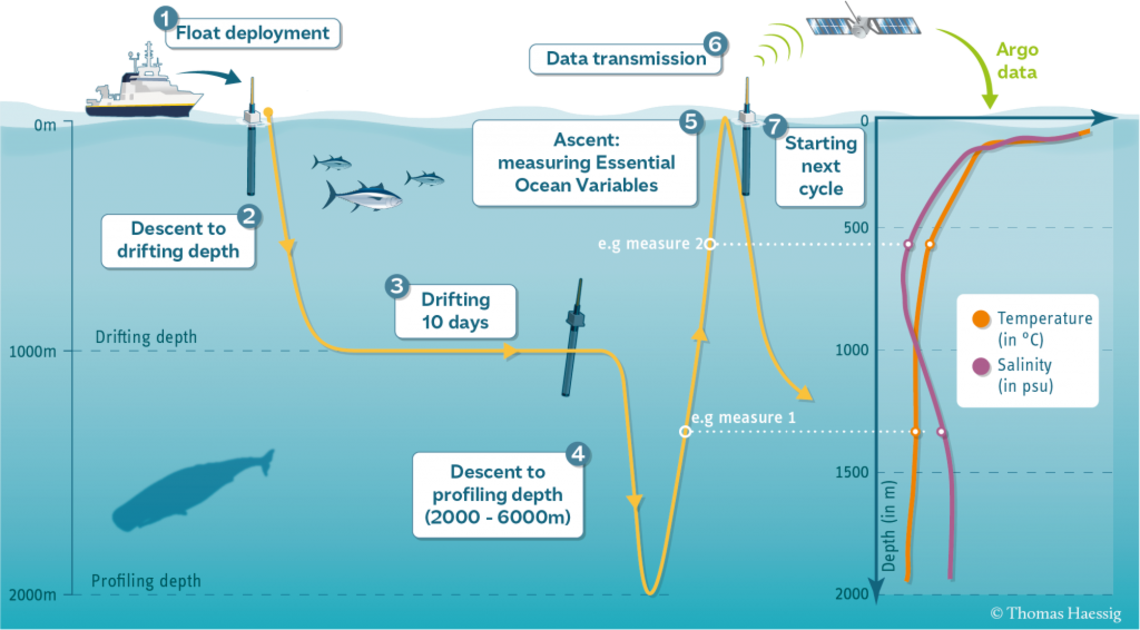 The Argo programme is intended to keep 4700 autonomous floats in operation. Of these 4700 floats, 1000 floats will be equipped with biogeochemical sensors (BGC floats) and 1200 floats will be capable of going beyond 2000 m depth (deep floats). There is no central support for Argo.  Each of the 30 countries deploying floats gets its own national funding to buy the floats, prepare and launch them, and process and distribute the data. The Argo programme is managed by teams of scientists and data experts who ensure that the programme operates as efficiently as possible and that standards are maintained at the highest possible level. Argo is the largest source of ocean data in human history and is part of the Global Ocean and Climate Observing System (GOOS).

Map of the Argo network